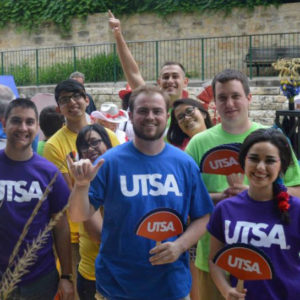 Anyone traveling through UTSA’s campuses is sure to notice the blue street signs, with Rowdy helpfully pointing the way. Those signs were created as part of an initiative started by then-Councilman Nirenberg and UTSA’s Student Government Association.

Conor Harvey ’15 was at the helm of that initiative – one of the highlights of three and a half years as an undergraduate. During his time at UTSA, he not only spearheaded several projects with SGA, but was also awarded the Jane Findling Award for students committed to the excellence of UTSA, earned an Archer Fellowship, and completed several internships even after he had hit his credit maximum.

Throughout all of this, Harvey never really thought of practicing law for a living. He knew he loved government work, and enjoyed learning about policy and practices in his undergraduate courses with Public Administration, but it was only when he decided on a Legal Studies minor that the thought blossomed into a potential career.

That decision ultimately brought him to the University of Chicago Law School, and to the opportunity to clerk for Justice Jimmy Blacklock of the Supreme Court of Texas.

As part of his job, Harvey assists Justice Blacklock with legal research, making legal determinations, and opinion drafting. “My courses in administration at UTSA helped me prepare for this,” Harvey said. Although “the heavy law school stuff” applies directly to his job, Harvey thinks understanding the intricacies of government administration is just as important.

The Supreme Court of Texas hears a variety of state-related litigation, including suits concerning various public agencies and officials. “You need to understand Texas government and how things work,” Harvey said. “What’s the regulatory scheme here, what is the most efficient outcome. There’s so much state litigation, and the Public Administration program helped me understand that side.”

Harvey also credits the faculty and the opportunities UTSA offers for his success. “Professor Jaramillo was always very supportive of internships and was kind of my informal advisor,” he said. His professors also encouraged him to apply for the Archer Fellowship, which enabled him to spend three months in Washington, D.C., learning about policymaking and government.

“Conor was an extremely hard-working and impressive student, able to speak and write about complex legal concepts in a sophisticated way even as an undergraduate,” said Francine Romero, Chair of Public Administration. “I am not at all surprised with his success in a very competitive law school program. I look forward to seeing how he makes his mark in the legal arena in years to come.”

Harvey encourages anyone interested in law to consider Public Administration – especially if one is not interested in the criminal justice aspect of law. “So much of law is not criminal in nature,” he said. “For example, Texas has two highest courts. Only one hears criminal proceedings.”