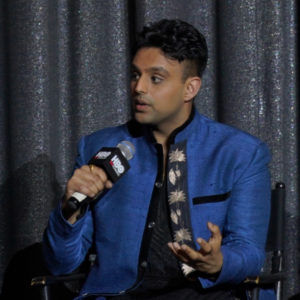 How did you get into filmmaking?

I usually go after creative pursuits and I’ve always wanted to work in film but that wasn’t always an option for me as I grew up undocumented. Another artistic field that I chose to channel my creativity into was architecture. When I enrolled in the UTSA architecture program, I gained a unique perspective that nurtured my creativity in new ways, which eventually influenced the way I approach filmmaking and storytelling in general.

I enjoyed studying in UTSA’s architecture program because I was inspired by the creativity of the built environment of the studio space. It was here where I learned the value of collaboration. Being around people who share common goals and vision as creatives built a sense of community and support. I ended up meeting my lifelong friends at the UTSA College of Architecture, Construction and Planning. To this day we still consult and support each other in our creative endeavors.

How did your time at UTSA help you with filmmaking?

It was really UTSA that prepared me for moving from San Antonio to Los Angeles. UTSA taught me important life lessons and helped me develop skills that laid a good foundation for me as an artist. UTSA also helped me learn how to handle rejection and that it was okay to fail. Growth and success require failure to be open to change. Within that window is where you really figure out your identity.

What made your film “Halwa” stand out in the HBO Visionaries competition?

Halwa was co-directed by Gayatri Bajpai and me. I’m grateful we won and I’m grateful for the opportunity, but we honestly just made this film because we wanted to lift up Asian-Pacific Americans and their narratives. Everyone who participated in the competition was a winner in my opinion. We all got our authentic voices out there for an audience to experience.

Our film is about an older Indian American woman who wants to rekindle her relationship with her childhood sweetheart through Facebook Messenger. We wanted to share an authentic South Asian perspective and dive deeper into our protagonist’s life and psychology. These narratives aren’t often being told today, thus it was important for us to create what we don’t see represented on our television screens. Halwa has been successful with its viewership not because of its unique cultural perspective, rather its universal human experience. We may all look different from one another, but at the end of the day we all feel the same emotions.

What was it like when you found out that you won this HBO competition?

After our submission, I received an email back in mid-February that was asking for a bunch of paperwork. I called HBO and was all, “Hi, why do you want all this paperwork for a rejection letter?” I assumed right off the bat that we had been rejected. The person over the phone told me I was one of the finalists. I asked what I was a finalist of—the top 50 or top 100? And she said, “No, you’re one of the three winners…” I then said a few curse words out loud. Then a week later we were on the phone with HBO’s VP of business affairs and talking about licensing.

In the next two months, we made a soft Hollywood debut and had a big premiere in L.A hosted by HBO. Even then we were not expecting to win until they called out our names. We had the lowest expectations, but we received the highest returns. It couldn’t have been a more rewarding experience. Now the real work has to begin. As a storyteller I live by one rule. Only speak if you have something to say. I think I have a lot more to say.

Nirav’s film Halwa was selected as the HBO Visionaries finalist in May. Watch it now on HBO’s streaming services.