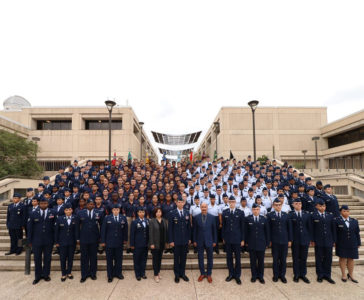 “It lends credibility to the fact that what we’re doing is right—and that we’re doing it well,” said Lt. Col. Brian Rendell, commander of the UTSA Air Force ROTC detachment. “Most importantly, it’s something that the cadets can be proud of.”

The cadets and staff alike have thrived at advancing the high mark of success established in 2018, when the group won the High Flight award, program manager Agustin Llano was named the nation’s Air Force ROTC University Employee of the Year, Capt. Jesse Beinhower was selected as the region’s best education officer, and Capt. Anthony Guajardo ’11 was tabbed as the region’s best recruiting officer.

UTSA’s program was recognized for its efforts in cadet development, engaging experiences, community support and its passion for investing in future leaders. These qualities have been noted not only by the Air Force but also prospective students around the nation.