Meet AquaBot Project Director, Kyle Fetter and AquaBot Project Manager, Denise Guerra. Kyle and Denise are undergraduate mechanical engineering students who transferred to UTSA and fell in love with the research and opportunities they found as Roadrunners.

One of the most challenging and engaging opportunities they’ve been a part of at UTSA is building a submarine with artificial intelligence, named the AquaBot. The AquaBot is a project with Advanced Robotics, a student organization that was founded at UTSA in 2015. Other projects that Advanced Robotics is working on include a robotic hand, a mobile ground robot that can transverse a maze and a new surface lunar dust instrument.

The AquaBot student team began working on a prototype submarine for the MATE Competition at the beginning of fall 2018. After taking about three months to build, the prototype was finished in early March. The team is currently working on the competition submarine which will feature artificial intelligence, remote control and visual recognition to identify shapes and colors. It will also drive in water as well as dive to a depth of 15 feet. It will also be equipped with a robotic arm that can be used to lift items and rotate them 180 degrees.

MATE is a national competition that consists of designing and constructing a remote-controlled underwater vehicle that is capable of navigating a lake and completing various underwater tasks. These tasks include inspecting a failed dam, mapping cracks, releasing fish and picking up a rock from the bottom of the lake—all within a total time of 15 minutes.

The MATE competition will help Advanced Robotics gain the necessary underwater vehicle expertise they need to participate in the 2020 RoboSub Competition. RoboSub is a Navy-sponsored international competition that allows university teams to design and construct autonomous submarines that are tasked with difficult underwater challenges. 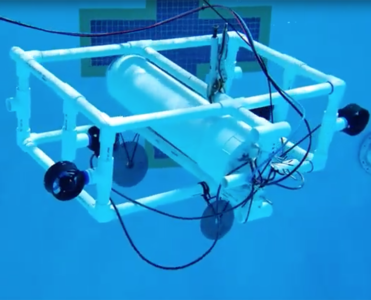 The AquaBot prototype was completed in March using 3D printed parts, Polyvinyl chloride, a Raspberry Pi processor and CAD software, which is readily available to all engineering students at UTSA. Their final competition bot will be made of high density polyethylene, aluminum and a Nvidia Jetson TX2, which is one of the fastest, most power-efficient AI computing processors.

“Getting the AquaBot to drive for the first time was very exciting,” said Kyle. “We needed to get it done by a certain date, so me and four others had to pull an all-nighter but we did it and it was a very rewarding experience.”

“I’m amazed by everyone’s skills,” said Denise. “Everyone on our team has learned so much from each other and it’s been a wonderful opportunity to connect with our fellow engineering students and also meet with corporations that are interested in our project.”

Building an autonomous submarine is just one of the many amazing opportunities awaiting undergraduates at UTSA. Three of the four AquaBot program leads are freshmen. In just their first year, they’re already gaining significant experiential learning that they’ll be able to take with them through their entire academic career—and beyond.