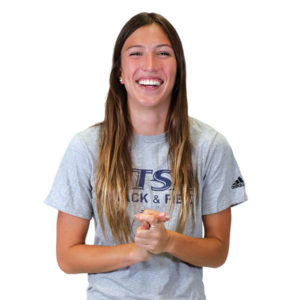 Gabriyella is a top performing student athlete on UTSA’s Track and Field team. She’s a recipient of an athletic and Distinguished Presidential Scholarship— which were awarded for her impressive athletic and scholastic achievements.

Ever since her sophomore year, Gabriyella has been one of the top scorers on UTSA’s track team. She’s part of a select group of athletes who participate in the Heptathlon, a strenuous contest that combines seven competitive events.

Gabriyella decided to become a Roadrunner because she wanted a university where she could build a foundation and leave her mark. One way she’s done this is by serving as the VP for the Student Athlete Advisory Committee (SAAC).

“With all of UTSA’s recent growth, I was able to take advantage of a lot of new opportunities that I wouldn’t have found anywhere else,” said Gabriyella.

One of the things Gabriyella likes most about being a student athlete at UTSA is the community she’s found here. She appreciates that UTSA is a place that not only invests in their athletes, but also sees her as a person instead of a number on the field.

However, being a student athlete is not without life’s own hurdles. Gabriyella admits that it can be stressful finding the time to prioritize between what’s important and what she wants out of her college experience.

“In college, most professors want you to study three hours for every hour that you spend in their class, but we also have a practice schedule, meets, tournaments and other mandatory events, on top of having a social life,” said Gabriyella. “It can be difficult to fit everything into a 24-hour day.”

To help overcome these challenges, Gabriyella makes the most out of her study time by “putting the world on silent” so she can focus. Even in the age of smartphones and other tech, Gabriyella still has a daily planner and calls it her best friend because she uses it all the time to write down everything she needs to do.

Gabriyella is a firm believer in getting the most out of her college experience. Along with her courses in business management, Gabriyella is taking several science classes in preparation for medical school. She’s a member of both the Professional Businesswomen Society and The Pre-Medical Society, and hopes to one day open her own practice.

“Make the most out of every year in college. Put 100% in because even though four years seems like a lot, it’s not. Start it off right and. give it everything you’ve got.