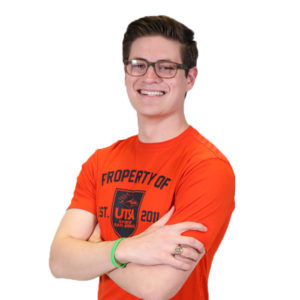 The UTSA Spirit of San Antonio (SOSA) marching band is going into its ninth year and contains over 330 band members, the majority of which are non-music majors. In 2014, SOSA was given the honor of representing the U.S. in Normandy, France, at the 70th anniversary World War II D-Day Memorial Parade. Meet Conner Smith, the band’s Head Drum Major for 2019.

As the Head Drum Major, Conner is charged with conducting the band and acting as the liaison between SOSA and the community. In addition to leading half-time performances for UTSA home football games, he also conducts at on-campus events and travels out-of-state with the band.

Nearly every week, Conner conducts on stage for an audience that ranges from hundreds to tens of thousands. “The opportunities we’re given blow my mind,” said Conner. Conner’s favorite part about being in SOSA is the reaction he gets from the community. It doesn’t matter if he’s performing for thousands at a game or for 50 at an on-campus event, the community never fails to respond, “The way the student body and community has embraced the marching band is very special and it means the world to us when we see how excited they are to have us perform.”

For Conner, majoring in Music Education was a no-brainer. Music has always been his favorite subject and he cherishes the connections he’s made from both his major and in SOSA. Conner chose to come to UTSA after meeting with students and faculty from the music department. He was invited to hang out with them on campus for a day and got to play with the band and go to a football game.

As part of being a music major, Conner studied abroad for 13-weeks in Urbino, Italy, where he took weekly trips to Italian cities like Rome, Florence and Venice and marched through cobblestone hills at an Italian Liberation Day parade.