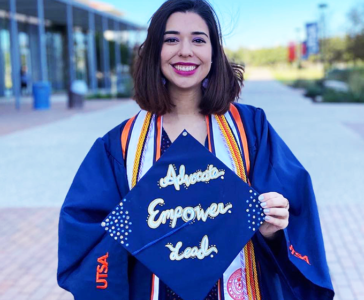 UTSA alumna Ana-Sofia Gonzalez ’19 has been named an English teaching assistant in the Fulbright Student Program. The Fulbright program is administered by the U.S. Department of State and is the flagship program for international educational exchange.

Born in Mexico City, Gonzalez grew up in Dallas and describes herself as a proud immigrant to the United States. Raised in a bilingual household, where English was spoken in school and Spanish was spoken at home, Gonzalez learned about language and difference from an early age. She witnessed how students like herself were stereotyped based on their ethnicity and socioeconomic status, rather than their character or their work in the classroom.

“Growing up, I often encountered classrooms decorated with posters that read knowledge is power. At first I didn’t think much of them, but eventually I realized this concept would be significant in my life,” Gonzalez said. “Less education means less general awareness and therefore less capability to create change. Toward the end of high school, I decided that I would no longer stand by idly in a rapidly polarizing society.”

At UTSA, Gonzalez became a leader through various student initiates. She founded the Women in Leadership group in 2017, which is a feminist organization that seeks to empower women in their everyday lives, as opposed to being strictly politically driven. Before graduation, she also served as chief of staff for Sustainable Youth Action, which was founded by fellow UTSA honors student Jay’Len Boone. The organization envisions a world in which young people are both civically engaged and empowered to use their creativity for social good.

Studying global affairs and Spanish, Gonzalez has learned about how leadership and cross-cultural understanding can be applied on an international level. She has put her classroom curriculum into practice accordingly, first studying abroad in Madrid and then serving as a volunteer in Mexico City with the International Association of Students in Economic and Commercial Sciences. There, she served as an English tutor for adults working at a marketing startup business. Her time spent abroad not only prepared her to apply for the Fulbright grant but instilled in her how to listen and understand others.

“Spending time alone in a foreign country is not always easy, but the benefits are numerous and wonderful,” Gonzalez said. “I was immersed in a unique culture and learned about the lives of students my age who grew up in completely different circumstances from my own. I learned humility, empathy and a willingness to ask for help and explore at a new level. I witnessed the commonalities that unite all of us. I learned to listen with the goal to understand even when I experienced confusion or disagreement. This enabled me to embrace new places and new faces.”