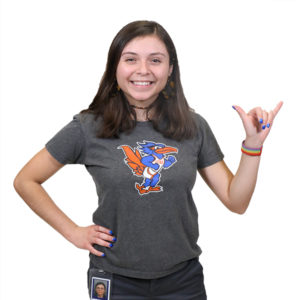 “We try to have meetings that involve minority and women developers because that is what is important to our organization and its members,” said Anna. “We are trying to build a community in a difficult major.”

Anna chose UTSA because of its proximity to her family in Austin and the opportunities that awaited her here.

“I have no regrets at all–UTSA has treated me so well. I wouldn’t change my major, the resources that I have been given or my experience here for the world.”

Anna is an award-winning scholarship recipient for The Grace Hopper Celebration, the largest conference for women in technology. Students like Anna come from all over the world to attend this three-day conference in the fall. The event includes a career fair with major tech companies, an expo that showcases the latest in technology, and interviews for students seeking jobs and internships in the field.

“My freshman year, I became a junior officer in ACM and ACM-W. These student tech clubs on campus completely changed my life, my outlook on my major and the friends I made,” said Anna.

This Roadrunner is passionate about STEM education and hopes to see more women represented in tech by teaching students in the future about the possibilities of a career in the industry.

“Women are being left behind in STEM. If I can get to these young women before they get to college and show them that an education in technology is possible, then I can help more women become interested in the field.”

Anna has also interned for Marathon Petroleum, founded the UTSA Rowdy Film Association, is a tutor for the Computer Science department, and is the director of RowdyHacks, which assists with hosting an annual 24-hour Hack-A-Thon competition for Computer Science and Engineering majors at UTSA.

Anna’s advice to Future Roadrunners is to explore. “As my anthropology professor once said, ‘You don’t start living until you’re out of your comfort zone.’”