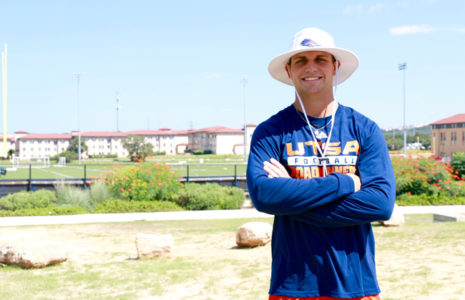 Meet Blake Bogenschutz. This former quarterback for the UTSA Roadrunners football team is now tackling his future as a civil engineer.

Bogenschutz grew up in the small town of Carthage, Texas and began playing football in the 7th grade.

He joined his high school’s team as a sophomore and as a senior received an offer to join UTSA’s football team. Excited to pursue a top-tier education and be a part of a brand new team, Bogenschutz happily accepted.

“I thought it was so exciting because we’re writing our own legacy,” he said. “It’s really thrilling to be a part of something new.”

Bogenschutz was struck by the close-knit atmosphere of the UTSA campus and found himself immediately at home even before he had played his first game.

“I’ve loved playing in the Alamodome, but I think my favorite part of the games is how loud it is,” he said. “It’s amazing to hear people cheering on both sides and showing so much spirit for their school.”

As UTSA’s quarterback, Bogenschutz led the Roadrunners for two seasons. However, in early 2016 he made the difficult decision to leave football behind after learning he was at risk for brain damage from sport-related concussions.

“It was the hardest decision I’ve ever had to face,” he said. “But my heart and mind are at peace with stepping away because my doctors advised me to.”

“I love math, especially geometry, so I want to build bridges and work with transportation,” he said.

Until he graduates, though, he’ll remain a part of the football team as a student assistant. As practices began this summer, Bogenschutz was there daily to support his coaches and teammates in every way he could.

“I’m working the new quarterbacks and helping out wherever the coaches need me,” he said. “I feel like I’m doing more learning that anything.”

The team is made up of upperclassmen he’s familiar with as well as fresh students recruited by the new head football coach, Frank Wilson. According to Bogenschutz, energy is high going into the new season and a lot of that has to do with Coach Wilson.

“He’s doing a great job of getting everyone pumped up,” he said. “I’ve been able to work with him a bit more closely than I would have if I was still a player, and he’s a great leader. He does a great job of explaining things so that everyone knows what they need to do and how to do it. From the beginning, it was clear he was going to be a great asset.”

For now, Bogenschutz is excited for the first game of the new season. The Roadrunners will face Alabama State on their home turf, the Alamodome, on September 3. Aside from game tips, he’s been advising the new players to manage their time wisely and balance their course load properly.