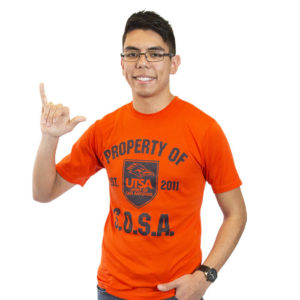 Since 2011, UTSA’s Spirit of San Antonio marching band has grown to almost 300 students and has had the honor of representing the United States in Normandy, France, at the 70th anniversary World War II D-Day Memorial Parade. Meet their student leader Bobby De Leon, Head Drum Major for 2016-17.

As a Drum Major, Bobby is in charge of leading and representing UTSA’s Spirit of San Antonio (SOSA) marching band. Besides getting to lead the half-time performances at the Alamodome for UTSA home football games, he’s had many opportunities to travel with the band.

During the 2016-2017 winter break, Bobby and his fellow SOSA members were able to spend part of their holiday in Albuquerque, New Mexico supporting the Roadrunners in their first bowl game appearance.

Bobby has a burning flame and passion for all types of music. Aside from band, he is a fluent saxophonist and a national collegiate mariachi vocal finalist. One of the key reasons why he chose UTSA was because the campus was one of few in Texas that offered a mariachi program. “Being able to sing and represent UTSA nationally is a big accomplishment for me.”

Bobby’s dedication and outstanding leadership motivates others, ensuring a bright future ahead for both him and his fellow musicians. “When I become an educator one day, I want to inspire like the UTSA faculty has inspired me.”