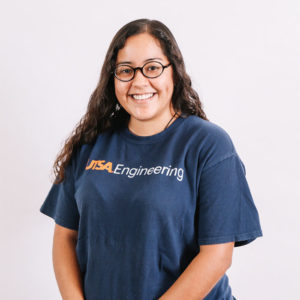 With three internships under her belt, one with the U.S. Navy Yard Strategic Systems Programs and the other two with the University of Minnesota, she’s constantly on the edge of digging up something new in the field of biomedical engineering. This summer, Brianna was in Minneapolis conducting research to measure a human’s sense of touch. Using a clip attached to a piezo disk, participants had to compare the force between two different “buzz” frequencies and discern if the buzzes were the same or different. The goal of the study was to measure a human’s frequency sensitivity to serve as a control group for recovering patients.

Briann’s fascination with biomedical engineering all started with a video. In it, a guy was hooked up to a prosthetic arm via a bunch of electrodes and there were wires coming out of everywhere. The guy was blindfolded, but he was able to reach out and grab something and control the amount of pressure and force he had in holding it. What was really interesting to Brianna was that, even though he was blindfolded, he was still able to perfectly describe what he was touching. Since then she’s been interested in prosthetics, how the body works and how it responds to outside objects and medical devices.

“At UTSA, I really like our access to research. You can just walk in and say you’re interested,” said Brianna. “A faculty member will do their best to hook you up and get you connected with research. You just have to show that you really want to do it.”

Brianna is involved in the Biomedical Engineering Society, a group of about 30 members that gives professional training and industry tours. They once visited a cadaver lab and even touched a dead body! She’s also a member of the College of Engineering Ambassadors and they help an elementary school robotics team and also support the College of Engineering in their leadership academy. She’s also a part of MARC-U*STAR, which is an honors research training program that prepares students for advanced academic research.

Her advice to Future Roadrunners? “At first you might be shy and think it’s wrong to ask questions, but it’s actually the opposite. Don’t be afraid to reach out and ask. Speak up— professors like it!”