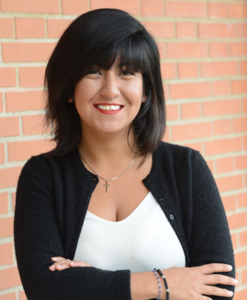 She remembers sitting at the kitchen table as an 8-year-old, flipping through the pages of a dictionary and trying to figure out what every single word on her homework meant.

So when the senior civil engineering major found herself in a similar situation last fall in an Urbino, Italy, post office – not understanding what she was being told and not knowing how to communicate what she wanted – she took herself back to those moments and coached herself through the situation.

Martinez, who was born in San Luis, Potosí, Mexico, was the first Deferred Action for Childhood Arrivals (DACA) student to participate in UTSA’s Education Abroad program and graduated in May 2017.

“It took me back to when I was 8, being so frustrated. I couldn’t get it fast enough. I couldn’t learn fast enough, but it just took patience. So I told myself, ‘I could do it once, I can do it again. It just takes a little time,’” she said.

The Urbino study abroad program is curriculum-focused, meaning that UTSA civil engineering students have the opportunity to put into practice what they learn in the classroom by partnering with architecture and construction science and management studies students on a project. The UTSA College of Architecture, Construction and Planning, and the UTSA College of Liberal and Fine Arts have been sending students to Urbino since 2011.

Martinez was part of the first cohort to participate in the Urbino civil engineering program. To be the first at something and to be successful at it isn’t anything new to Martinez. She learned it at home.

She’s the oldest child in a family of six, and the first in her family to go to college. As a DACA student, Martinez is ineligible for federal financial aid so making her way through college was difficult financially, but – as is her nature to look at the bright side – she says it was a good way to build character and be grateful for those who surround and support her.

At one point, her mother juggled four jobs to help pay her tuition. When Martinez’s father was injured in an accident, he approached his daughter’s high school social worker and, together, they helped raise the money needed for tuition. Having people come alongside her to help is something she is thankful for, whether the help was coming from family and friends or faculty and staff. Additionally, Martinez received a scholarship from the Walter Zackery Ramey Memorial Award, which she said made a huge impact on her ability to study abroad in Urbino.

“Carla is very smart and a hardworking student. She always asks me good and interesting questions. She always wants to know more and more,” said Alberto Arroyo, professor in the department of civil engineering and one of Carla’s favorite instructors.

“Carla is a very dedicated student. She has excellent organizational skills and works well with her classmates. She is a team player. Her involvement with the college is fantastic. She has been an ambassador,” said Manuel Diaz, another of Carla’s professors in the College of Engineering.

When Martinez learned about the opportunity to study abroad, she looked at every obstacle as simply something to work through.

“Through it all, I was very unsure about how it would all turn out. I was very lucky to have people to guide me,” Martinez said.

Education Abroad and College of Engineering staff helped her, but she also sought the advice of the first UT Austin DACA student to study abroad.

To fund her trip, she held fundraisers that friends and faculty helped her with by donating, volunteering, and promoting.

And in May, she graduated with not only with a bachelor’s degree in civil engineering, but also an experience abroad she will always carry.

“Never in my lifetime did I think I was going to get to study abroad,” Martinez said. “I had all these limitations, and nothing stopped me.”

Story by Marissa Villia on Innovations/Photos by Deborah Silliman