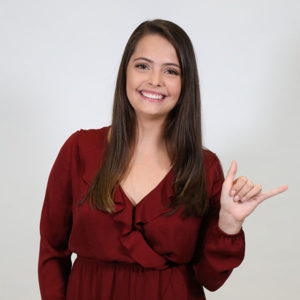 Junior Carlyn Abbott is the perfect example of a Roadrunner that wants to change the world. Carlyn is a San Antonio native and is studying biomedical engineering in the Honors College at UTSA. Born with a love for math and science, Carlyn knew from a young age that a career as a Reconstructive Plastic Surgeon was her calling.

“When I was 13, I went on a family trip to Canada and I watched an infomercial about children with cleft lip and cleft palate,” said Carlyn. “It broke my heart and I ended up sobbing—it was just so sad. Ever since then, I was like, ‘Okay, that’s what I want to do one day; I want to help these children.’”

What was once an inspiring infomercial has now turned into a perpetual goal for Carlyn. At the age of 17, Abbott received the opportunity of a lifetime to travel to the Philippines to shadow ENT (Ear Nose Throat) surgeons performing facial reconstructive surgeries on children born with cleft lip and cleft palate.

Medical Missions for Children, a missionary program offered in third-world countries, gave Abbott hands-on experience in a field she would one day study at UTSA.

“I completed a lot of registration work. I was able to weigh the babies and watch the procedures. I suited up in medical gear and would go into the operating rooms while the surgeons performed the procedures,” said Carlyn. “I knew it was something that I wanted to do theoretically, but actually being there in the field, and seeing how lives are being changed—it’s such a beautiful process.”

Gaining hands-on medical experience in the Philippines prepared Carlyn for her next chapter in the biomedical field, as she now works on UTSA’s Medical Innovation Design Research Team designing the latest in medical technology for military combat doctors overseas.

Abbott conducts research with UTSA’s Medical Innovation Design Research Team in a medical innovation designs lab on campus that is used specifically for creating medical devices. The team is creating a new device that will be used to stabilize the breathing of patients who are injured in military combat. The device would be used in emergency medicine to assist medical experts who need immediate access to the patient’s airway in order to assist them with breathing.

Aside from conducting innovative research on campus and studying biomedical engineering, Abbott is also a college information advocate panelist, a player on the intermural soccer leagues on campus and a proud member of the Biomedical Engineering Society. Her advice to Future Roadrunners is very simple: Don’t be afraid.

“Don’t let fear paralyze you. It’s so easy to be afraid and let that stop you from pursuing what you love. Don’t let it.”