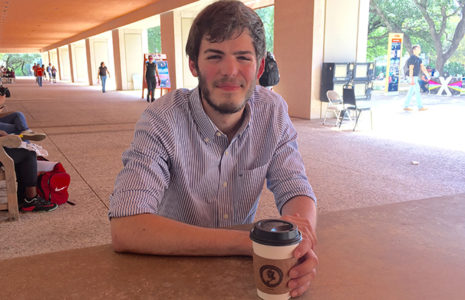 Meet Christopher Brown. Coffee is his passion. The senior anthropology major drinks it, roasts it and is now studying it at UTSA.

“I feel like the education here at UTSA is based on my interests and allowed me to explore what I am passionate about,” said Christopher Brown.

“Since I was always drinking coffee and talking about it, my friend told me I should study it,” said Brown. He works at What’s Brewing and loves to try new coffee spots around town.

Brown spent a portion of the summer in China immersed in the coffee culture there as part of a unique program offered through the UTSA East Asia Institute. He worked at a coffee shop in China and met coffee growers, roasters and baristas. He even met students in China who helped him learn about the coffee scene.

“This trip was a fantastic way to find something to study not really covered in anthropology,” Brown said.

Now that he is back on campus, Brown is using the lessons he learned during his summer in China to work on independent studies before he graduates in December.

“I feel like the education here at UTSA is based on my interests and allowed me to explore what I am passionate about,” said Brown.

Brown is the president of the Anthropological society at UTSA and member of Lambda Alpha. He says UTSA faculty involved in top-tier research programs helped make his projects about coffee possible.

“Teachers in anthropology and other departments in the university are very involved with students,” said Brown. “I couldn’t thank them enough for everything they have done to help me.”

Brown says his anthropology classes have opened doors for him, and he’s excited to see what’s next.

“Everyone should take at least one anthropology class at UTSA. It’s a subject that helps you with every discipline,” Brown said.

Brown wants to continue studying coffee and hopes to become a professor to share his knowledge and passion for it with students.