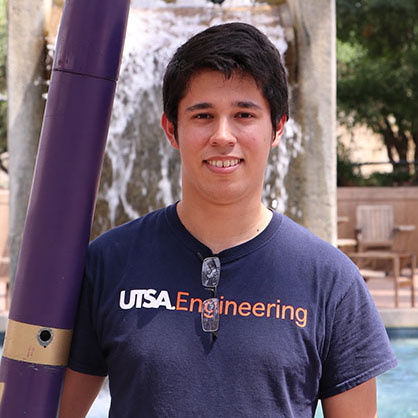 Meet Erick Castillon, a class of 2019 mechanical engineering major from San Antonio. He chose UTSA because of San Antonio’s central location, it was home, and it was an affordable option with a great education.

Erick has a passion for studying aerospace, specifically rocketry. So much so, that it helped him land a pair of internships from NASA. The first involved helping design an advanced nuclear thermal propulsion engine and for the second he assisted with creating a test setting for a launch rocket that would be powerful enough to take humans to Mars.

Erick’s love for rocketry led him to form a UTSA student organization called the Aeronautics and Rocket Club (ARC). One of the first rockets they developed is reusable and capable of launching up to 2500 feet high. Erick says the club’s goals are to help students demonstrate engineering principles outside of the classroom and expose them to relevant work experience and skills through real-world applications.

“At UTSA, I love how we are encouraged to promote new ideas rather than just stick with the status quo,” said Erick. “I feel like in college you should explore your own interests, and I was able and encouraged to create a presence for aerospace that wasn’t here originally.”

After Erick graduates, he hopes to continue working for NASA as an engineer who tests rocket engines—a dream of his ever since he was a child. Additionally, he’d love to see and play a part in an aeronautic revival within the San Antonio community.

Erick’s advice to new students interested in studying engineering at UTSA is, “Be open. Don’t think that you’re restricted to just the common core or usual fields. UTSA provided the opportunity for me to start something that was completely new. Be open to creating something new and making it your own. Don’t be afraid of that.”