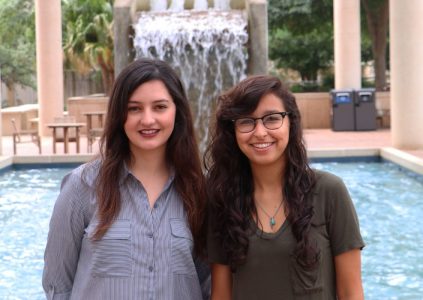 Meet Estefania and Jorden, two class of 2017 architecture students. As seniors, they competed in the American Institute of Architects Committee of the Environment (AIA COTE), a nationally recognized student design competition. Their project, “Housing a Million” placed in the top ten and set out to restructure the way San Antonio accommodates for its growing population with new options in affordable and sustainable housing.

Instead of sprawling out further into the undeveloped suburbs beyond Loop 1604, they decided to design within San Antonio’s city limits. They did this affordably by creating an energy efficient tiny home community out of unused lots within downtown subdivisions. In designing this plan, Estefania and Jorden wanted to create a space where residents could walk to work, live healthier lives, and also contribute to a greener environment.

Jorden is originally from El Paso and moved to San Antonio during her childhood. She knew she wanted to study architecture from a young age because she was always building things with Legos or on computer games. She was enticed by all the possibilities that came along with learning architecture and even took it as an elective in high school. She chose UTSA because it was the best school that was within close proximity to her home and family. Her favorite thing about studying at UTSA? The faculty!

“You can take a project to multiple professors and get advice from each one of them. It’s such a friendly and helpful community,” said Jorden.

Their advice to new students interested in studying architecture:

Estefania: Try and have as much fun you can. Don’t take your design time for granted. It’s when you’ll get to be the most creative.

Jorden: Embrace it all and get to know your professors as much as you can.