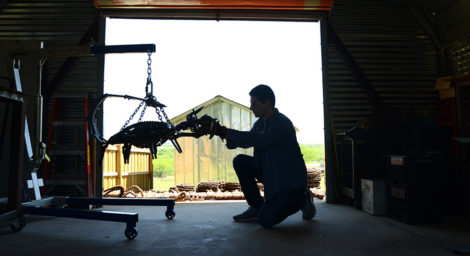 Hunter Prinz, a junior mechanical engineering major, demonstrates the moving parts of a scorpion he made completely out of scrap metal at his home in Schertz, Texas.

“My father always worked with cars, and I was always with him. I picked up welding from him,” said Prinz. “Last year, I wanted to make one of my best friends a birthday gift. He loves music so I used some of the scrap metal we had around the house and welded him a guitar. I got a lot of positive feedback about that piece, so I started doing more metal art, including this scorpion.”

Prinz has partnered with a local company called Bracken Recycling where he now gets the majority of his scrap metal for his welding projects.

“We call it ‘upcycling’ instead of recycling,” Prinz said.

Prinz’s scorpion took about 10 days to design, three days to weld, and the piece weighs about 450 pounds, moving components and all.

Prinz said he doesn’t have a lot of time or money to design large projects like car suspensions while he’s studying at UTSA. But he has big plans for the future.

“I have a lot of ideas in my head but I can’t do them until I have the money for it,” he said. “This metal art is a good outlet for me. It is a great way to get my designs out of my head so I am not constantly overwhelmed with them. I don’t want to be constantly studying books all the time. I really like to get out and work with my hands.”

When Prinz graduates, he says that his dream job is to work in the automotive industry or own his own company.

“I am constantly seeing things that I want to improve upon,” Prinz said. “It’s not about owning a company and making lots of money. It is about making new things, something that will help and change the world.”