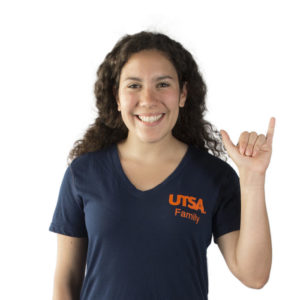 Stepping onto a college campus for the first time can be exhilarating—and a bit overwhelming. As an Orientation Leader, it’s Isabella “Issy” Beltri’s job to ensure students have a smooth transition into college. She does this by leading groups of new Roadrunners through Orientation, where she teaches them about UTSA and its academic services, all while helping them have the time of their life during their first true college experience.

Issy is a junior majoring in psychology and is currently serving as both Ms. UTSA and the president of the Triathlon Club. She has a passion for helping students and serving as a mentor to them as they step into college. “Later in the year, they’ll often come back to me with a question, and I can continue to set an example and teach them to learn to love UTSA as much as I do.”

Issy chose UTSA because it was in the perfect location between family, and because, like Goldilocks choosing between beds and chairs, the campus wasn’t too small or too large—it felt just right. Out of the several universities she was accepted to, UTSA was the only one with an admissions counselor who reached out over the phone to congratulate her on being accepted. When it came time to choose between colleges, this personal touch was one of the many factors that helped Issy make her decision.

Although the process to become an Orientation Leader at UTSA is quite extensive, Issy knew it was something she wanted to do.

“I wanted to follow in the footsteps of other student leaders who were influential to me. I admired them so much, and it looked like so much fun.”

Issy is proud to follow in the footsteps of her former mentors by becoming a student leader to hundreds of new Roadrunners experiencing UTSA for the first time.