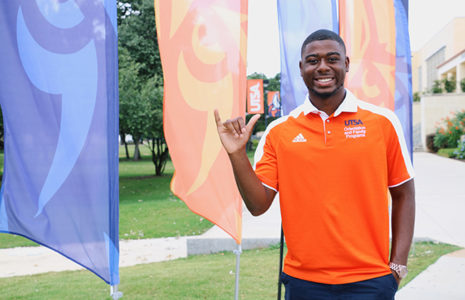 Meet Jacorey Patterson. This UTSA communications student and Orientation team leader has discovered his true passion for helping others.

“I really got a sense of home and even though home is three hours away in Houston, I felt at home here,” said Jacorey Patterson.

Growing up in Houston, Patterson was known for his outgoing personality. Raised by a single mother, he credits his mom for his drive and work ethic.

“My mom taught me to always work hard and that hard work pays off,” Patterson said. “She also showed me not only things a mom would do, but what a dad would do, too. She taught me how to tie a tie, respect women and yourself, and how to carry yourself the right way.”

He was also a mentor in an organization called Peer Assistance and Leadership (PAL®). His job was to help younger students see their potential and make a difference in their lives, schools and communities.

In search of a top-tier education and a strong sense of community, Patterson said UTSA was always on his radar.

Patterson is known as a social butterfly. That personality helped him grow and reach out to others at UTSA. He’s even running for Mr. UTSA this year because he truly believes he embodies the spirit of UTSA while striving for the highest levels of academic achievement, campus involvement and community service.

Now an incoming junior, the Roadrunner is focusing on making a difference at UTSA. He wants people to remember him for the work he does in the community and for helping others along the way.

His biggest advice to incoming students is to find themselves.

Along with being an Orientation team leader and the president of the Orientation Leader Association, Patterson is a peer mentor and involved with several other organizations on campus, like Men of Honor.

Being an Orientation leader has also inspired Patterson to consider a career in higher education.

“I always tell the Orientation team that I would love to be the Director of Orientation one day at UTSA. But really, I would love to do anything having to do with higher education and working with students. If I could come back to UTSA to do it, though, even better.”