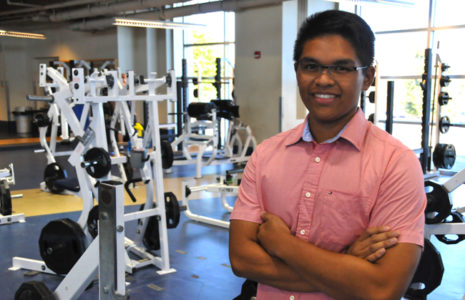 Meet Jomari Guerrero. He’s a future doctor who has made diabetes his sworn enemy.

“I wanted to be a great physician, I wanted to prevent these diseases instead of just teaching people to deal with them. That’s when I realized that if I’m not healthy, I’d be a hypocrite,” said Jomari Guerrero.

When Guerrero was first accepted to UTSA, he was 130 pounds heavier than he is now. As a native of Edinburg, Texas in the Rio Grande Valley, he was inspired to pursue a medical career so he could serve the Valley population.

“Where I come from, diabetes is a serious problem,” he said. “Doctors there are curing patients instead of taking care of the disease before it arises. Obesity and diabetes are so common, and they are completely preventable.”

Because Guerrero was overweight, he suffered from hypertension and was at risk for diabetes. His doctors gave him medications for his hypertension instead of addressing the root of the problem. That frustrated him.

As an aspiring physician, he felt that doctors should advise lifestyle changes instead. When it came time to look for a university where he could pursue his passion, he found the top-tier opportunities at UTSA exciting.

Guerrero is a part of the Facilitated Acceptance to the Medical Education (FAME) program, which allows him to pursue a biology degree at UTSA while also preparing for medical school through courses at the UT Health Science Center. He’s receiving a multidisciplinary education as he becomes familiar with the many aspects of patient care.

“In the summer before my freshman year, I started researching different aspects of health because I was looking into what kind of physician I want to be,” he said. “I wanted to be a great physician, and I wanted to prevent these diseases instead of just teaching people to deal with them. That’s when I realized that if I’m not healthy, I’d be a hypocrite.”

That epiphany was a blow to Guerrero’s self esteem, but he decided to start slowly. He drank water for a week and cut out juice and soda. Just with that change, he lost five pounds.

“From there, I wanted to keep going,” he said. “I treated it like a game. I recorded my weight every week and kept seeing the numbers go down.”

He was used to eating 3,000 calories a day, but eventually cut that down to 1,700. He counts his parents, who are both nurses, as his biggest supporters.

“They told me all my life that I should eat healthy and exercise more,” Guerrero said. “My weight was becoming such a problem that I was embarrassed, so I was hiding what I was eating. Finally, I decided it was time to lose weight.”

In solidarity, his parents changed their eating habits as well and joined him at the gym for an hour a day.

“People would stare at me at the gym,” Guerrero said. “I was very self-conscious. Plenty of people are helpful and encouraging, but some are just judgmental. I had to learn to overcome that and focus.”

That summer, he lost 60 pounds. In his freshman year at UTSA, he lost another 70 with his healthy eating habits and daily exercise. Now at a healthy weight, he hopes to be an inspiration to his patients.

“I want them to know that I’ve been there,” he said. “I want to be able to show them it’s possible and say that I know it can be done.”