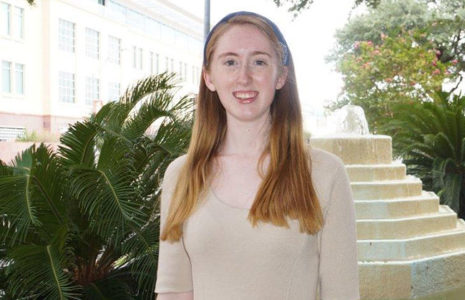 Meet Mairin Derk. As an actress and director at Robert E. Lee High School’s North East School for the Arts (NESA), Derk felt right at home on the stage. But a love of history turned her away from the limelight when she decided on a college major.

“I’ve always benefitted from being around different kinds of people. I can’t wait to meet new people and do new things,” said Mairin Derk.

Derk, a National Merit Commended Scholar and a member of the National Honor Society at Lee, is one of 10 new UTSA Top Scholars this fall. She says her experience with theater helped prepare her for the competitive academic life ahead.

“I always loved theater as a way to get out of myself and learn new things,” said Derk, who also served as a peer tutor at Lee. “It helped me discover who I am as a person. Theater brings people together. It taught me teamwork and professionalism.”

Derk produced numerous productions at NESA and appeared in Les Miserables. She also performed at Magik Children’s Theater and appeared in Legally Blonde at Woodlawn Theater. As a director, she felt proud when everything came together on stage. “I felt like I had a hand in something,” she said. “I learned how to direct a group without being too overbearing or too nice.”

In contrast to many of her high school classmates, Derk decided not to pursue theater as a career. She followed the advice of her acting director, who said, “If you can imagine doing anything other than theater, do it.”

Fortunately, Derk had another interest that led her to pursue an anthropology degree, which she hopes to use to strengthen the worldwide sense of a global community.

“It all started with a love for history,” she said. “I was the weird kid reading biographies of Queen Elizabeth in the corner of the library. I realized that everything that happened a long time ago is relevant today. There are so many different things I want to explore.”

Derk said she was also inspired by the television comedy-drama Bones. Its title character is a cultural and forensic anthropologist who examines human remains for the FBI.

Derk concedes to having “a few nerves in my stomach” about coming to a large university. But she’s prepared for the academic demands of the UTSA Top Scholar program. To remain in the program, participants must maintain a GPA of at least 3.25, complete 30 hours each academic year, and complete at least one community service and leadership development project each year.

“I’m so excited and honored to be part of this program,” Derk said. “There are benefits from being in a small-group situation. It’s like being in a family. I’m used to making a family for myself.”

She also says that she will thrive on UTSA’s diversity.

“I’ve always benefitted from being around different kinds of people,” she said. “I can’t wait to meet new people and do new things.”