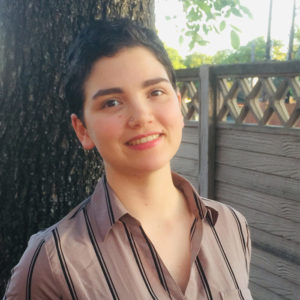 Mariam hails all the way from Tunisia, a country in North Africa. As a dual citizen, she moved to the U.S. in 2013 to study Modern Languages at an American university.

For Mariam, UTSA was the obvious choice. Everything came together for her here: proximity, affordability and having the major she wanted. On her first day as a Roadrunner, she knew she’d be majoring in Modern Language Studies and later decided to concentrate on studying Russian.

“I took my first class of Russian thinking ‘Oh, I’ll just take a semester or two,’ but it was the contagious enthusiasm and passion from UTSA’s professors—and how they care for their students—that helped me decide on this concentration,” said Mariam. “Hands down, my professors are my favorite thing about the program here. I consider them my friends now and they love keeping up with me. They’ve been a great support system.”

Mariam started at UTSA as a freshman in fall 2015 and recently graduated in December of 2018. Even though she started with some credit and was able to graduate early, she still achieved a lot during her time as an undergrad. She worked for the UTSA Department of Modern Language Studies as a work study and also gained some experiential learning abroad.

In the summer of 2018, Mariam received the Critical Language Scholarship and studied abroad in Vladimir, Russia, a small city east of Moscow. During those two months abroad, Mariam cultivated lifelong connections with her host family and the other scholarship recipients.

On April 15, 2019, Mariam will return overseas to serve in Georgia for the Peace Corps in a role that she thanks UTSA’s Career Center for helping her land. During her 27-month assignment, she’ll be teaching English, helping with youth development programs and hosting learning workshops. After her two years in Georgia, she plans on studying international relations in graduate school or teaching English independently in Asia.

Mariam’s advice to Future Roadrunners is, “Take advantage of all the resources available to you. Put yourself out there and get out of your comfort zone. It won’t always be easy but that’s OK.”

“The main goal is, you’re investing in yourself. Your college experience is an investment. Your goal is to get your degree and get a return on that investment.”

One piece of advice that Mariam herself still holds on to comes from her Russian Professor, Dr. Nummikoski. Whenever Mariam would visit her with bad news, Professor Nummikoski would remind her that everything would work out and be fine.

“At the time, even though I couldn’t see the light at the end of the tunnel, she would say that this too shall pass. It doesn’t matter what you’re going through—you just need to keep moving forward.”