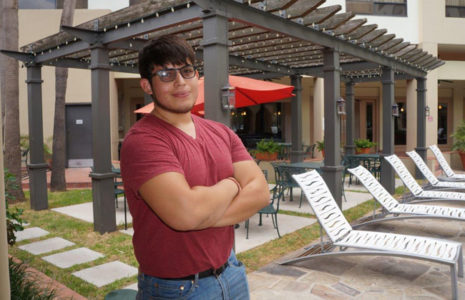 Meet Oscar Cantua. Like so many UTSA students and graduates, he’s a first-generation college student reaching for the stars. In Cantua’s case, though, it’s a little more literal.

“I was really inspired by the moon landing and all the feats that were accomplished before me,” said Oscar Cantua.

Born in Saltillo, Coahuila, Mexico, Cantua relocated with his mother and sister to Sinton, Texas when he was in kindergarten. Since then, he’s become a passionate, extremely involved student, to the point that he admits he overbooked himself a little in high school.

“I’m very quick to sign up for things,” he said. “Sometimes that was bad for me because I wasn’t able to juggle everything, but honestly I just dug in. I’d be at school from 7 in the morning until 9 at night, then I’d go home and do homework until midnight.”

Cantua played tuba in the marching band and was a member of his high school’s football team. He was also in National Honor Society, played track and field, was president of the Tri Music Honor Society, participated in the Academic Decathlon and is a National Hispanic Merit Scholar. As for his grades? Cantua graduated second in his class and came to UTSA as part of the university’s Top Scholar program.

“I liked everything that I did and I wanted to stand out,” he said. “I knew that extracurricular activities would make me look good on applications, but I honestly loved them.”

Cantua has plans to study physics, a culmination of his long fascination with space exploration, inspired by years of study into the golden years of NASA in the 1960s.

“I was really inspired by the moon landing and all the feats that were accomplished before me,” he said.

Now, Cantua’s motivated to become part of the generation that explores Mars, although he said he wouldn’t go himself. He’s been inspired to be a part of mission control since meeting Gene Kranz in high school as part of a program for aspiring engineers at the Johnson Space Center. Kranz was brought to life by Ed Harris in the film Apollo 13, which fictionalized NASA’s efforts to bring home a group of stranded astronauts who were bound for the moon.

“He came in and talked to us about what it felt like to avoid that catastrophe,” Cantua said. “He told us how you have to make these decisions and be able to live with them. That was something I never thought about before. You have to go for it with the best of your abilities.”

Cantua is no stranger to hardship. For the past two years, he’s lived with a family friend after his mother was deported back to Mexico due to a traffic stop. Cantua’s mother raised him with a strong emphasis on seizing opportunity and creating a better life for himself through higher education.

“She couldn’t get a higher education; she barely finished eighth grade because her family was too poor and she had to start working,” he said. “She made a lot of sacrifices so we could have the opportunities she never had. I want to make the best of what I had to make something more of myself.”