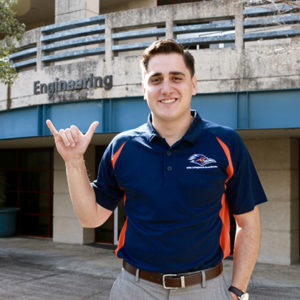 Meet Paul Hamilton. This exemplary engineering student is looking forward to a career with NASA.

“UTSA really has been a great experience. I’m going to miss it, but I know life goes on,” said Paul Hamilton.

Hamilton, who was born in San Antonio but grew up in Helotes, was never quite sure what kind of career he wanted to pursue. A dedicated athlete in high school, a disciplinary incident resulted in his expulsion as a senior, an experience that initially left him a little lost.

“I had some rough formative years,” he said. “To be where I’m at now is just surreal.”

One thing Hamilton has a wealth of, though, is dedication. He set out to finish his high school degree at an alternative school, which requires students to attend for at least four hours a day but allows them to learn at their own pace. Hamilton attended for 11 hours each day and finished the remainder of his degree in 30 days. That allowed him to graduate eight months ahead of his friends at his former high school.

Initially, Hamilton pursued a degree at Northwest Vista College. After discovering that engineering was a lucrative, exciting career and that UTSA had a top-tier College of Engineering, he made the decision to transfer in 2013.

“UTSA was an outstanding fit for me,” he said. “I liked that it was a more tight-knit school and had such a strong sense of community.”

He quickly became a part of that community, working in the Institute for P-20 Initiatives and as a tour guide to prospective students.

“Being a tour guide really bonded me with UTSA,” Hamilton said. “I know at least a handful of people in every building on campus. Being a student here is just a very personal experience.”

In the fall of 2014, Hamilton took time away from his classes to accept an internship at NASA. He worked on a variety of projects, including writing software for mission control that was used in the fall of 2014 flight of the Orion spacecraft, which later that year was launched into low Earth orbit. He also helped to improve the piloting systems on other spacecraft.

“The experience with NASA has been surreal, to put it succinctly,” he said. “The things that they do are so cutting edge. It’s incredible work, and here I am, some small-town kid thrown into the mix with the world’s brightest minds. I feel like Charlie in the chocolate factory.”

Hamilton returned to UTSA in 2015, but subsequently took three more semesters off to continue working with NASA. He’s now set to graduate in May, and has accomplished his goal to leave college debt free, thanks in part to the Ed Whitacre Leadership Scholarship. The $10,000 merit-based scholarship, which is named for celebrated General Motors engineer Ed Whitacre, allowed Hamilton to pay off the remainder of his loans and focus on completing his studies.

“I was excited because I had already read Whitacre’s book. When I heard the news, I wrote him a letter to thank him,” he said. “UTSA really has been a great experience. I’m going to miss it, but I know life goes on.”