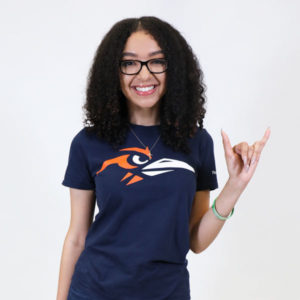 Meet Sydney Garcia. Sydney is a senior psychology major who is the ultimate Roadrunner, juggling multiple leadership positions on campus while also being a Terry Scholar.

Durning Sydney’s senior year of high school, she found herself applying to multiple scholarships to get as much financial support as possible for college. After being connected with the Terry Foundation through her college career office, Sydney applied and was called back for an interview at UTSA.

“Being awarded the scholarship gave me the push to come to UTSA,” said Sydney. “It was my top school and I didn’t know how I would fund it, so the scholarship really helped support me in my decision.”

Sydney is very grateful to be a Terry Scholar at UTSA and for all the tools and experiences she’s picked up along the way.

“What’s neat about the foundation, is that they have events that the scholars can attend to get to know each other and meet UTSA alumni. I really built a support network through that,” said Sydney. “My Terry Scholar advisor has been influential in getting me involved in opportunities that will help me get into grad school.”

This Roadrunner has also served the UTSA Community as President of the Alpha Kappa Alpha Sorority Incorporated Chapter at UTSA, President of the National Panhellenic Council, Fraternity & Sorority Life Liaison for the Council of Student Organizations, Black Student Orientation Chair for the Black Student Leadership Council and a Trip Facilitator for the Civil Rights Social Justice Experience.

One of Sydney’s major accomplishments at UTSA include a P20 Education Pathways Fellowship opportunity that allowed her and other fellows to present research at Standford University’s “So What Are You Working On?” Conference in the summer of 2018.

“My research was over Instructional Spending in Bexar County–basically seeing if schools with different socioeconomic demographics were serving their students equally. Later, I was able to present that research at Standford University.”

After being accepted into multiple master’s programs and with everything else that she’s accomplished, Sydney’s advice to Future Roadrunners is truly worth listening to try new things.

“The skills that I’ve gained by putting myself out there and stepping outside of the box have made me become more involved in organizations that have given me new tools and have expanded my social network.”