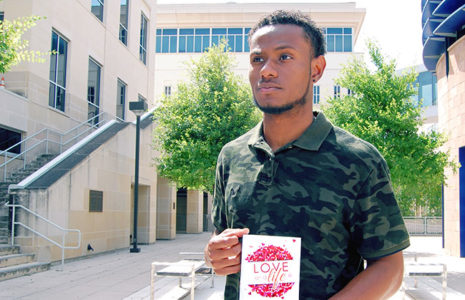 Meet Victor Cyrus, Jr. This Houston native will soon be a published author and poet.

“As a student, I’ve had to make decisions on my own, away from my home. Those decisions helped me find my identity. I hope to use my voice to connect with others and to speak up to break the silence,” said Victor Cyrus.

Cyrus’ first book will be published by Tate Publishing this fall. The book, “Love and Life Told Through Poetry,” is a meditation on life and love, taking inspiration from his own personal journeys and also those of the people around him.

Cyrus uses the written and spoken word to share his stories. He has performed spoken word at universities throughout the country.

The UTSA political science major was inspired to write the book after a positive experience with a fellow student who approached him at his first spoken word performance. He shared a poem he’d written about his little brother, who had been diagnosed with autism, at a slam poetry event on campus. Afterward, a young woman told him she related deeply to his story. Her encouragement inspired Cyrus to continue writing and sharing his work.

A dedicated and loyal Roadrunner, Cyrus credits his time at UTSA with shaping his outlook on creativity and service. He has served the university in a variety of capacities, including student organizations such as Men of Honor, the UTSA chapter of the NAACP and the Black Student Union.

“My time at UTSA has helped me grow up,” Cyrus said. “As a student, I’ve had to make decisions on my own, away from my home. Those decisions helped me find my identity. I hope to use my voice to connect with others and to speak up to break the silence.”

Cyrus is also known among his peers for his tireless public service; he has coordinated Buddy Walks for Autism and is a long-time member of Big Brothers and Big Sisters of South Texas. Many of these experiences have inspired poetry in his book.

Cyrus is pursuing a Bachelor of Arts degree in political science from the College of Liberal and Fine Arts at UTSA. He has his sights set on public service, hoping to one day serve as a U.S. senator. His dream is to be remembered for his good work in life and service like his inspiration Rev. Dr. Martin Luther King, Jr.

“Love and Life Told Through Poetry” will be available nationwide in September through Amazon, Barnes and Noble, Costco and Sam’s Club.