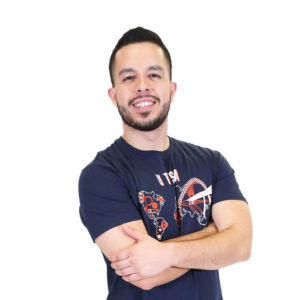 It all started with a flyer. In 2016, Walter was a UTSA transfer student from Houston who was halfway through his college career. He was studying engineering and looking for ways to get involved at his new university. Through a colorful piece of paper that caught his attention inside the Engineering Building, Walter learned about Engineers Without Borders (EWB).

Engineers Without Borders is a non-profit humanitarian organization that helps improve the quality of life in developing communities worldwide. Currently, their UTSA chapter is working on a water sustainability project in Peru that will provide clean water to 90 families.

Walter was immediately interested in the water sustainability project because he has family nearby in Honduras and instantly felt a connection to that part of the world.

Last fall, Walter joined as an EWB member and began developing friendships with the officers. In the following semester, he became an officer by serving as the organization’s secretary. At the start of Fall 2017, he was asked to step in as president.

“I love the people I’ve met at UTSA through the engineering community and organizations I’ve been involved in,” said Walter.

As an introvert, Walter was forced to come out of his shell when he became president of EWB. It’s helped him develop a variety of essential soft skills like writing, researching and public speaking.

“In addition to being a rewarding experience, EWB has also been an incredible opportunity for me. Getting involved in an organization and becoming a leader has helped develop skills that tie directly into building a resume. It impresses companies looking to hire.”

Like Walter, you too could make a world-changing difference for families and communities that are continents away. If you’re open and willing, there’s no shortage of opportunities that can be found at UTSA. Even if they’re just randomly hanging out on a wall somewhere.