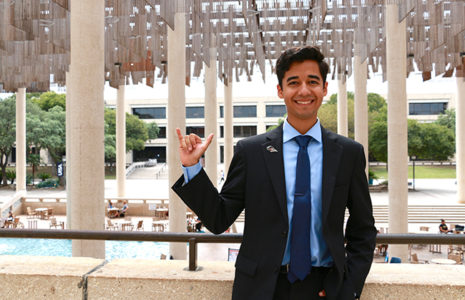 “UTSA provides every student with the opportunity to advance themselves – not only academically but personally, socially and professionally. There is a place for everyone at UTSA,” said William ‘Frankie’ Trynoski II.

Trynoski was born in Maryland and spent much of his younger years in Virginia before moving to Texas in middle school. He finished high school in the small city of Kyle and found a home at UTSA in the fall of 2013.

“I decided to come to UTSA after I had the opportunity to tour the campus when I was in high school,” said Trynoski. “I came thinking that this was only temporary, but I joined SGA and fell in love with the school, and I decided to stay. It was honestly one of the best decisions of my life.”

Trynoski credits UTSA with helping him become the person and leader he is today.

“As cliché as it may sound, I have truly learned who I am during my time here,” he said. “The most valuable thing that coming to UTSA has taught me is it has challenged me to find myself – to find my strengths, my weaknesses, likes and dislikes.”

Trynoski has many important leaders and mentors that he looks up to both at UTSA and in his personal life.

“My biggest hero is without a doubt my mother. I would not be the person I am today without her love and guidance, and I am truly honored to have had the privilege of being her son.”

Trynoski’s mother served 22 years in the United States Navy; she retired as a Senior Chief Petty Officer. She pulled her way out of poverty to provide for her family.

“My biggest mentor at UTSA has certainly been my friend Ileana Gonzalez, who is a former SGA president. Ileana’s friendship and guidance have been instrumental in my development as a leader and as a person. I am truly thankful to have ever come across such a wonderful individual.”

As SGA Vice President, Trynoski wants to inspire his fellow Roadrunners to get involved.

“I tell every freshman I speak to, ‘Do not be a student who just goes to class and goes home. Look for that student organization that will challenge you. Look for that internship that will give you the skills you need. Do research that will expand your mind.'”

This fall, Trynoski has been focused on encouraging more students to vote.

He facilitated the Student Government Association’s Civic Engagement Week, and he helped with National Voter Registration Day at UTSA. During the latter, more than 800 people registered to vote in a single day.

After graduation, Trynoski wants to use his political science degree and what he has learned at UTSA to attend law school.

“I want to make a difference in this world, and I want to practice law. Whatever happens after law school is still a mystery for me. But as long as I’m doing what I love, I don’t mind.”

Trynoski says that UTSA has provided him with great opportunities.

“Being able to attend a top-tier university is a unique experience. UTSA provides every student with the opportunity to advance themselves – not only academically but personally, socially and professionally. There is a place for everyone at UTSA.”