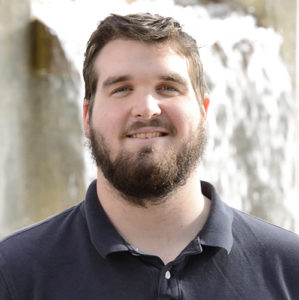 Meet Caleb Thurmon. This graduating Roadrunner is ready to make a positive difference as an inspiring teacher.

Born in Noonday, Texas, a town with less than 1,000 people roughly 15 minutes outside of Tyler, Thurmon, 22, is the youngest of six children.

“Not many people hear about Noonday,” Thurmon said. “It’s one of those towns you can just drive right through and you’re out before you know it.”

Thurmon and three of his siblings were raised mostly by his father. They moved around a lot due to his father’s work in the oil field industry.

In 2012, Thurmon enrolled at UTSA as an interdisciplinary learning and teaching major, but he struggled financially as the third of his siblings to enroll in college.

“Paying for college was a challenge,” said Thurmon, who took out loans and worked while he was a student. “Financially, my father did the best he could, and he provided as much as he was able. He was a great man. It wasn’t easy to get all the money together.”

The UTSA undergraduate was determined to succeed, though, following in the footsteps of his stepfather and other inspiring role models he had met in the classroom.

“In school, I had teachers who were just amazing, doing everything they could to help,” said Thurmon. “They were invested in you. They wanted to make sure your future was bright. I was inspired by them.”

On the flip side, Thurmon recalls having a few teachers who were less than satisfactory.

Thurmon hit the books immediately at UTSA. The rigors of UTSA’s interdisciplinary teaching and learning program, he said, were exactly what he needed to become a skilled educator.

Since the beginning of the spring semester, Thurmon’s been working as a student teacher at Hobby Middle School in Northside Independent School District, where he teaches history to eighth graders. That practical experience has given him greater insight into effective teaching strategies. It’s also taught him how to best engage his students.

“Being at UTSA has been the greatest blessing in my life,” said Thurmon. “Knowing that you can impact a student’s life and be someone that they will remember as a positive influence—that’s got to be one of the best feelings.”

Thurmon is excited to graduate and move on to the next stage of his career. His biggest supporter and motivation is his wife, who he met at UTSA.

“My wife has helped me to do and accomplish so much,” Thurmon said. “I’m so proud to graduate from UTSA. I know I couldn’t have done this without her love and support.”