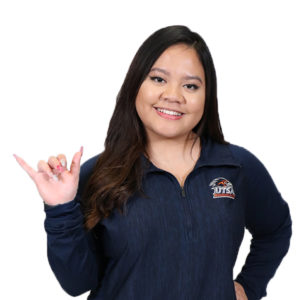 Priscilla started at UTSA as a freshman and hails all the way from Jakarta, Indonesia. She decided to come to San Antonio to study because she already had family and friends here and they would always tell her about the city’s diverse culture. Coming from another culture herself, this reassured her that she’d be moving into a welcoming environment.

One of the things Priscilla appreciates about studying in the States is how the dynamic between professors and students is different than what she’s used to back home. She finds it’s more relaxed and open and that the professors are more approachable during and after class.

“I’m not afraid to bring something up with my professors because I’m encouraged to talk to them about what we’re learning,” said Priscilla.

Moving across the world and studying in a new country can be intimidating for anyone. For Priscilla, she was worried about getting to know her classmates, especially in her larger classes. However, she quickly found her fellow Roadrunners to be very welcoming and open to communication. In her first semester, she was able to get connected with her peers, build community and overcome her early fears.

Priscilla chose to study communication because it’s a broad field that incorporates a variety of topics into her learning. “As a communication major, there are so many fields I touch on such as journalism, graphic design, mass media law and marketing,” said Priscilla. “Having so many options to choose from is what drew me into this program.”

Priscilla is minoring in business administration and is part of Delta Sigma Pi, a professional business fraternity on campus.  She joined as a freshman and learned a lot about professional development, how to improve your resume and elevator pitches. Through the organization, she also became more familiar with large San Antonio firms like USAA and Valero and even toured their campuses.

As an international student, Priscilla admits that finding a job can be challenging, but she was able to land two on campus. Priscilla now works as both a student ambassador where she leads tours for the UTSA Welcome Center and as an admissions outreach representative where she answers admissions questions over the phone.

Pricilla’s advice to international Future Roadrunners is, “Don’t be intimidated by a large campus. UTSA is a large university, but with that comes a lot of opportunities and communities that are waiting for you to be here and are willing to welcome you with open arms.”