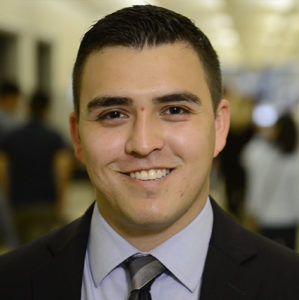 Meet Freddie Cuellar. He’s taking his talents as a natural leader into the world of finance.

Born in Hondo, Texas, Cuellar grew up with a deep admiration for his father, a self-made entrepreneur who owns many different businesses around San Antonio.

“I really watched him become the man he is now,” Cuellar said. “I saw him go through the struggles to get his businesses financed and how he never let anything set him back. It was inspiring.”

Cuellar’s upbringing instilled the value of hard work in him, which led to a job as a teller at a local bank while he was still in high school. He discovered he had a knack for finance and once he graduated he knew that he wanted to pursue his degree at UTSA’s top-tier College of Business.

“It just made a lot of sense,” Cuellar said. “It was nice having my family nearby, and even though finance isn’t an easy degree, UTSA did a great job of providing me with the resources to succeed.”

He remembers always having the support of his professors, who were willing to meet with him outside of class to make sure he understood the material.

“Finance is a challenging subject, because you’re always building on what you’ve previously learned,” Cuellar said. “If you fall behind, you’re going to keep falling behind. But my professors always made sure everyone was keeping up.”

As a first-generation college student, Cuellar noted that he was lost at times because he felt that he couldn’t turn to his parents for guidance about the choices he had to make as he progressed at UTSA.

“It was hard,” he said. “I wasn’t sure what classes to take or if I was pursuing the right degree at first, but in the end I’m actually happy about that. I know I would have gone down another path if things had been different, but I found my own way and learned to trust my own judgment.”

Cuellar applied that confidence to several leadership roles at UTSA. He has served as the president of the Business Student Council, a group that organizes events to teach résumé-building, networking and professionalism to students. He also had a leading role in planning the 2015 Texas Energy Expo, a student-led career fair that brought recruiters from the energy industry to UTSA, allowing students to network and explore opportunities. Planning the event taught Cuellar a lot about large-scale organization and leadership.

“It was like launching a small business, in a way,” he said. “We had to have everything in place, and at the time the oil industry was really struggling. We had to work even harder to get some recruiters here, but I think it was a great success and the event has continued since then.”

Set to graduate in May, Cuellar is now looking forward to a position at Vantage Bank Texas, where he completed an internship last spring. In his new job, he’ll be evaluating small and medium-sized businesses for borrowing opportunities.

“In finance, you can easily find success at a bigger bank, but I wanted to be able to work on a more personal level and help small businesses,” he said.

As he looks to the future, Cuellar credits UTSA with preparing him for the next stage of his life.

“UTSA really positioned me for success,” he said. “It opens a lot of doors for its students, but it’s up to us to make the most of those chances. My dad used to say that you take the bull by the horns, and when you see an opportunity you have to tackle it.”