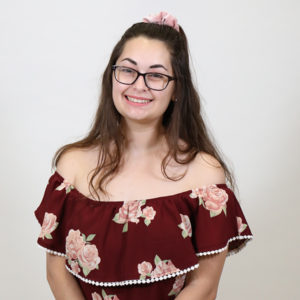 Meghanne first fell in love with learning the Spanish language when she started taking Spanish classes in high school. From that moment on, she decided to become a Spanish major. A few years later, Meghanne enrolled at UTSA because her family lived in San Antonio and she wanted to attend a top university in the area. Plus, her grandma always mentioned how UTSA was a great school for teachers. The rest is historia.

Meghanne’s favorite thing about UTSA’s Spanish program is the academic diversity. “It’s not just about learning the language like it was in high school,” said Meghanne. “It’s about so much more like the literature, culture, phonetics and grammar. It’s a very extensive discipline that includes learning about Latin American and Spanish history.”

Meghanne plans on becoming a Spanish teacher after she graduates. She’s had several great educators over the years that have helped inspire her. “Learning Spanish has a lot of benefits and it would be really cool to continue to share that with future students.”

Last semester, Meghanne served as the president of the Spanish Honor Society where she held weekly meetings and hosted Spanish tutoring sessions. Because this fall is her last semester before she graduates, she’ll be stepping down from president to do student teaching. Even though Meghanne’s just beginning her student teaching, she already has several hours of tutoring experience thanks to the opportunities she’s received from the Spanish Society.

Although Meghanne’s parents are both fluent in Spanish, she mostly spoke English growing up. However, she still considers the language to be an important part of her heritage and is proud of the family connections it has helped strengthen.

“Spanish plays an important role in my heritage,” said Meghanne, “Through my studies, I’m now better able to communicate to my abuela who mostly only speaks Spanish and we can now watch her favorite telenovelas together.”

Meghanne’s advice to Future Roadrunners is to be open and communicate with your classmates and professors because then you can know everyone’s expectations and ask for help when you need it.

“Communication helps you and your peers become a team that can build and bring out the best in each other whether it’s in a class, study group or social gathering.”