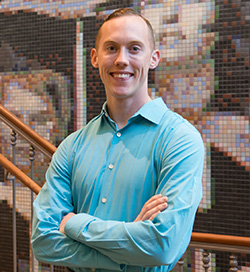 A Tennessee native, Brewington came to Texas in 2012 when he was stationed in San Antonio with the U.S. Air Force. When it came time to further his education, the possibility of doing research as an undergraduate attracted him to UTSA and he enrolled during the Fall of 2016.

“UTSA has more of a research focus compared to other universities, and that really interested me,” said Brewington. “I knew I wanted to major in psychology and work with experienced researchers in the field.”

While serving his country in the Air Force, the UTSA undergrad is immersing himself in the research process and is learning how to apply for graduate programs as a UTSA Educational Research Training Program fellow.

The UTSA program was established in 2016 with funding provided by an Institute of Education Sciences’ program called The Pathways to the Education Science Research Training program. It provides undergraduate students, many who are first-generation like Brewington, with an introduction to research methods and connects them with mentors to prepare for graduate or doctoral study in educational science across various disciplines.

Brewington’s fellowship has allowed him to work with influential mentors such as Harriett Romo, sociology professor and director of the UTSA Mexico Center and Bank of America Child and Adolescent Policy Research Institute (CAPRI), and Sophia Ortiz, CAPRI’s assistant director.

“Dr. Romo, Sophia Ortiz and other CAPRI staff have been very helpful during my time at UTSA because they’ve taught me how to navigate the application process for graduate school and have been a great support system as I consider future career paths,” said Brewington.

In addition to getting tips on applying to graduate school, Brewington has learned how to develop an academic CV, has secured letters of recommendation from mentors to accompany his applications and has networked with students and faculty who have similar research interests.

As an undergraduate, Brewington has been introduced to the research process under the guidance of Thomas Coyle, a professor in the UTSA Department of Psychology. Coyle’s research interests include cognition and development.

The UTSA senior says he wants to continue to study cognitive development when he becomes a graduate student. He’s specifically interested in how standardized and IQ test results predict academic outcomes.

“I believe that it’s imperative to know how to interpret and understand tests that are used to place students with disabilities and different skill levels in appropriate educational programs,” said Brewington.

Eventually, Brewington is interested in becoming a school psychologist.

“UTSA has given me the skills and knowledge I need to conduct cognitive psychology research of my own in the future that will hopefully be used to develop programs nationwide to address students’ needs and helps them succeed,” said Brewington.