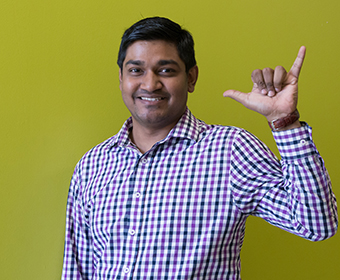 Meet a Roadrunner, Soe Than

Meet Soe Than. This Roadrunner traveled a long way to pursue his dream of studying computer science at a top university in the United States. Than was born and raised in Myanmar (Burma) and is the only student enrolled at UTSA from that country.

The international student said that while researching American universities, he read articles about UTSA being a prestigious cybersecurity school in the United States. He read more about the different programs in the College of Business and College of Sciences and knew that UTSA was where he wanted to be.

In the spring of 2015, Than enrolled at UTSA. At the time, he had a few friends in Austin, but he didn’t know much about Texas.

Than says his transition to life in the United States and San Antonio was made a little easier once he asked questions and utilized resources on campus, such as the Office of International Programs and Tomás Rivera Center.

When he visited the Tomás Rivera Center, which provides comprehensive academic support to students, he discussed his academic goals and received coaching that helped him stay on track to earn his computer science degree with a focus on computer and information security.

“I asked a lot of questions and even with the cultural barrier, I was able to tap into support services at UTSA to develop my skills and stay on track to graduate in May of 2018,” said Than.

He credits the center for a lot of his early successes at UTSA and has since grown to become a web specialist there. He has also worked in the center as a supplemental instruction leader.

He has also devoted significant time to serving students outside of the classroom.

Than is the founder of the Global Roadrunners Association, a student organization that aims to help other international students, like himself, feel connected to the campus community.

“The group is meant to bring together all international students and provide them with a support system for a smooth transition to life in the United States and at UTSA,” said Than, who wants to build the group this year through meetings and networking events and eventually form a global network of UTSA alumni.

In his free time, the Roadrunner works with the UTSA organization, VOICES, which coordinates volunteer projects and programs for students, faculty and staff. He also serves as the public relations officer in the Association for Computing Machinery at UTSA. The latter helps students identify career paths and networking opportunities in the computing and technology fields.

Despite those time commitments, the Roadrunner continues to provide support to those in his home country. With fellow members in Austin, Than volunteers for a non-profit organization called Love for Myanmar, which sponsors orphanages.

“I am learning to become a global citizen during my time at UTSA. When I see a problem, I want to be a part of the solution,” said Than. “I hope to use the expertise I’ve gained at UTSA to bring about social equality and bring citizens around the world, from different backgrounds, together.”